Most mining activities are conducted by open system (open-pit mining), which cause scraping of the upper soil surface, digging (cutting) and filling (Ghose and Majee, 2000). The result of this open-pit mining system is the removal of all soil’s upper layers, that will cause deterioration of the physical, chemical and biological properties of the soil (Arshi, 2015). The mining activity also affects some environmental impacts such as development of acidic soils and waters, erosion of tailings by wind and water, and physical disturbances to the landscape (Benidireet al., 2020). Soil with low pH in ex-mining land could retard plant growth by increasing the solubility of heavy metals and toxic elements in soil (Wahab and Marikar, 2012). Acid soil condition could decompose existing Aluminum in the soil. Aluminum acted as a limiting factor in plant growth by inhibiting root growth and root extension so the plants could not extract nutrients from the soil. This will disturb the interaction between nutrient absorption by plants, such as reducing absorption of other essential nutrients (N, P, K, Ca, Mg, Zn, Fe) by plants (Anetorand  Akinrinde,  2007). Toxic elements can cause physiological and biochemical disorder during plant growth (Delhaize and Ryan, 1995).

The soil media was collected from silica post mining area (0-20 cm depth) at Cibadak, Sukabumi District West Jawa (06o55’18.1” S and 106o47’10.8” E).  The soil media was air dried, sieved (2 mm) and autoclaved at 1210C for 1 hour at Silviculture Laboratory.  Compost was obtained from the company CV. Laksmi Prima Bogor Indonesia with the trade name of Agro Flower. It had the following characteristics: pH 7.71; C-organic 48.79%; N 0.58%; K 1.00% and P205 2.90% that was analyzed at the Soil Laboratory, Department of Soil Science and Land Resources, Faculty of Agriculture Bogor Agriculture University. Lime was purchased from the farmers’ market as dolomite.

Seeds of C. calothyrsus were originally from the Center of Research and Development for Forest Seed, Bogor Indonesia. Seeds were soaked in hot water (100°C) for 5 minutes. Afterwards, they were soaked in cool water for 24 hours for breaking their dormancy. The seeds were sown in germinator box filled with sterilized zeolite and placed in green house for two weeks. The Arbuscular Mycorrhizae Fungi (AMF) Glomus mosseae were originally from the collection of Silviculture Laboratory, Faculty of Forestry and Environment, Bogor Agriculture University. The fungi were multiplied on kudzu (Pureria javanica) for eight weeks under greenhouse conditions on sterilized zeolite medium.

Plant height (cm) was measured from plant base to upper tip of the plant using meter rule. Plant steam diameter (mm) was measured at 1 cm above the base of the seedling’s stems using digital caliper.  The plant roots were sampled before harvest and stained according to the procedure of Clapp et al., (1996). Percentage of root colonization was determined according to the method of O’connor et al., (2001). Sixteen weeks after planting, plants were harvested  to determine their biomass (g).  Biomass weights were recorded after drying at 70°C for 72 hours until constant weight is attained.  The chemical properties of growing media (pH, C-organic, N total, available P and Aluminium content) after 16 weeks of planting were analyzed.

The chemical properties of growing media from silica post mining land are presented in Table 1. It can be seen that soil chemical properties of growing media (Table 1) could not support plant growth and development due to its pH and low to very low levels of essential nutrients concentration in soil medium. On the other hand, some heavy metals such as aluminum and Fe are very high. The soil growing media amended with soil ameliorant, either alone or in combination could increase their pH, available P and reduce their aluminums content (Table 2).

The soil growing media amended with lime 5.79 g (A0B1) and lime 10.58 g (A0B2) increased their pH to the category of slightly acid to neutral and reduced their content of Al to nontoxic level. The addition of lime 5.79 g and compost (A0B4) and lime 10.58 g and compost (A0B5) increased the soil pH to neutral category, and reduce Al content to very low level which could not be measured.

The results of this study show that: (i) the addition of the soil ameliorant compost or lime alone or in combination to growing soil media originally from silica post mined land, significantly modified the soil pH and soil nutrient contents, (ii) AMF inoculation with G. mosseae significantly improved C. calothyrsus growth after 16 weeks of planting in greenhouse condition and improved chemical soil characteristics when combined with soil ameliorants, and (iii) these changes were significantly linked to a higher mycorrhizal colonization.

It’s well known that aluminum is a micronutrient needed by plant in small amount and plays an important role as enzyme co-factors in metabolisms processes (Zattaet al., 2000). Aluminum availability in the soil is greatly affected by soil pH (Dong et al., 1995). High aluminum concentration in the soil becomes toxic for plant growth (Delhaize and Ryan, 1995). Numerous studies have shown that several soil ameliorants such as lime and compost can be used for increasing soil pH, reducing soil aluminum content  and modified soil nutrients (Anetor and Akinrinde, 2007; Chung, Wu and Ho, 2008; Muindi et al., 2015; Teshome et al., 2017; Novak et al., 2018). Similar results were obtained in our studies that revealed the addition of lime or compost alone or in combination increased soil pH from very acid level to neutral level (Table 2). Interestingly AMF inoculation combined with addition of compost alone (A1B3) or in combination with lime (A1B4 and A1B5) greatly increased availability of soil P (Table 2).  AMF have the ability to produce phosphatase enzyme which can alter phosphate compound in the soil into ions and facilitate the plant roots to reabsorb them easily (Bini et al., 2017; Foo et al., 2013). According to Gardner, (2008) soil pH is the main factor that influences solubility and availability of plant nutrients in the soil. Our studies also demonstrated that addition of lime and compost alone or in combination greatly decreased aluminum in soil medium (Table 2).

Impact of soil ameliorants on AMF development and plant growth 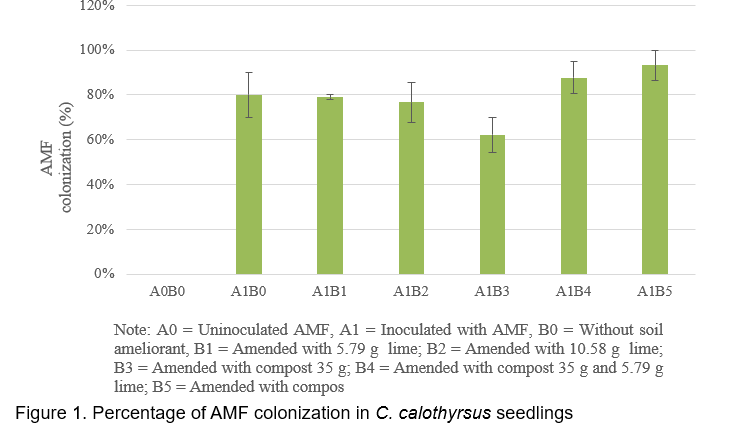