Barringtonia asiatica (L.) Kurtz, commonly known as sea poison tree, is native to tropical coasts including the Philippines and islands of the Indian Ocean and western Pacific Ocean. In the Philippines, it is locally known as “botong” and is used as a traditional medicine for stomach ache and rheumatism. B. asiatica has also been used as a biopesticide for the control of the golden apple snail (Pomacea canaliculate), a major invasive pest of rice in the Philippines. 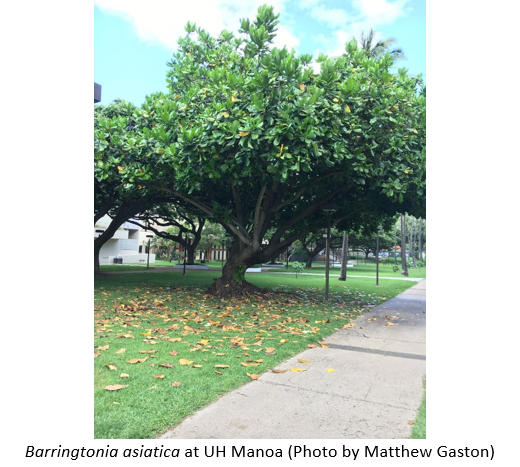 Recently, its use as a biopesticide for agricultural and medical applications was explored by the Biological Control Research Unit of the De La Salle University. The crude aqueous extract obtained from the seeds of B. asiatica showed significant inhibition against Phytophthora palmivora, the causal fungal pathogen of black pod rot in cacao. The seed extract also exhibited larvicidal activity (100% mortality rate at 5% (w/v) concentration)  against the larvae of Aedes aegypti which is the most important vector carrying the virus responsible for dengue fever.

The chemical profile of the leaves, bark, and seeds of B. asiatica has been extensively studied. Several bioactive compounds have been identified to have antifungal, anti-inflammatory, and analgesic properties. However, further characterization and evaluation must be performed in order to create formulations specific for the control of the target pests. Additional information must also be collected on the effect of these compounds on the ecosystem particularly on nontarget organisms.